So…What does an NFL Equipment Manager Do?

My emotions and nerves were running wild.  I felt as if I was to play in the Super Bowl and World Series.  The butterflies were rumbling in my stomach.  I was very intimated at the sheer fact of eventually being in the same room as the Jacksonville Jaguars head equipment manager, Drew Hampton, and my favorite Jag player, Maurice Jones-Drew. At first I wasn’t quite sure what I was getting myself into.  However, as soon as I walked into the Jaguar locker room, everyone made me feel very welcomed and my nerves immediately began to die down.

I began my interview with the head equipment manager, Drew Hampton. Drew gave me a lot of insight of what goes on before each and every game. I never knew how much there was to getting ready for a game. I had learned that Drew became interested in becoming an NFL equipment manager through his father, who had worked with the New York Jets for 38 years. He told me “he was in the locker rooms since he could walk, up until I left for college.” Drew’s job consists of a lot. From preparing all 53 players, 22 coaches and any extra people on game days. They tend to pack for a total of 85 people and are considered the ‘den mothers’ for all the players and coaches. He only keeps two assistants on staff and works 16-17 hour days, seven days a week during the season. 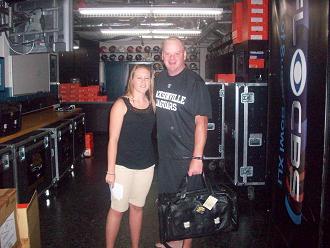 Believe it or not, Drew gets a budget of one million dollars each year to handle his responsibilities. These equipment managers look at their schedules as soon as they come out. They look to see where they play and they begin looking at the weather forecasts for where they are playing to know what to pack. For colder football games, they take everything from performance thermal wear, to performance gloves and socks, beat warmers, hand warmers and much more.  Drew reiterated the importance of monitoring the weather for each and every game so that a week before the game to know what to pack.

I asked Drew what steps a person should take if they wanted to become an equipment manager, he told me “internships with professional football teams, or get involved if there’s a football team at the college you attend.” To lighten up the interview, I asked Drew what he likes to do for fun, “I say I like to play golf but I’m not good at it.” Then I asked him what he would be doing if he were not an equipment manager. This question took him a bit longer to respond to, “that’s a good question; I’d probably be a police officer because I have great admiration for them and I think it will be a pretty good job.” Being a football equipment manager takes up a tremendous amount of time. Drew is married and has three girls, who understand his job is his passion and they support him through it.

Crazy hours, lots of preparation and commitment to doing your job to the best of your ability…an NFL equipment manager has many responsibilities and is an integral part of the football team.